The L. H. Selman Fall Auction is about to launch. Initial bids will begin on October 19th and end on November 2nd.

For this auction, our blockbuster piece is an antique Saint Louis with a small menagerie of silhouette canes and accompanying 1845 date cane that quite alters a previous theory. The common assumption so far has been that the first silhouette canes appeared with the Baccarat introduction of the much-fêted Gridel canes in 1847. So, perhaps this Saint Louis, our Lot #1, will inspire some interesting discussion. That would be a fine thing.

Another interesting piece is our Lot #7. It is a very beautiful Baccarat cabbage rose, which is not to be confused with a Baccarat thousand-petaled rose. The cabbage rose has ruffled petals, as opposed to the flat petals of its cousin, and represents about 9% of Baccarat rose production while the thousand-petaled rose makes up the remaining 91%. Roses were created in equal numbers of pink and red. Ours is a luscious red.

For the last several auctions we have found ourselves with an embarrassment of riches – antique riches, specifically. Consignments arrive in waves, sometimes overwhelmingly modern and sometimes antique. As luck would have it, we are particularly flush with antiques at present and supply and demand, as we know, drive the market. I suggest that those of you who have been too shy to venture into the delirious realm of 19th century glass paperweights might want to pluck up some courage and step into a time machine. Reserves sometimes take surprising and drastic turns.

A particularly distinguished collection, that of C. Frank Kireker, whose name many of you will recognize, has turned up one of a very limited number of modern Saint Louis super-magnum piedouches. These are extraordinary feats! Produced to honor Paul Jokelson’s years of dedication and accomplishment in the world of paperweights, this design is thirty inches in circumference, includes five hundred feet of canes, is 9 ½” tall and weighs 55 pounds! Very few people in the world have the privilege of owning a piece of this grandeur. Other examples of this edition are appropriately housed at the Corning Museum of Glass and at the Art Institute of Chicago.

On a less sophisticated note but one that is nevertheless really good (read “fun”), this auction is peppered with pumpkins and goblins for Halloween and with candy canes and stars for the holidays. We have a motorcycle rider, little weights with tiny bird’s nests, frogs, creepy-crawly critters, sedate millefiori Perthshires and rollicking, giant Muranos. Of course, as you have come to expect, we have the best representation of lampwork artists you will ever find at auction anywhere. We hope you’ll tune in. 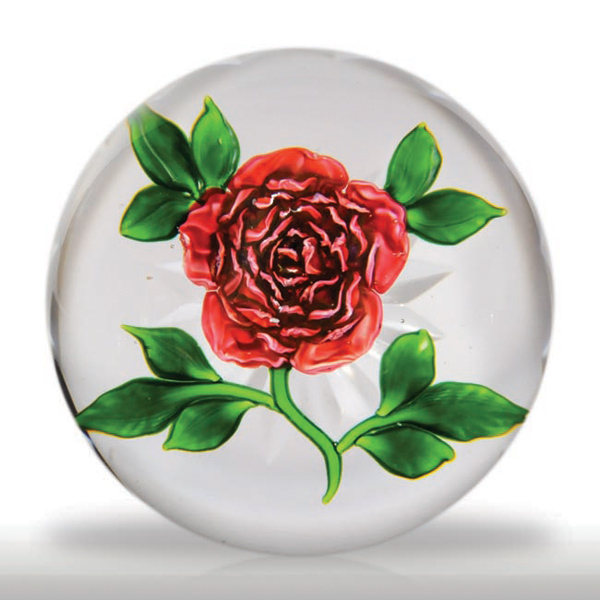 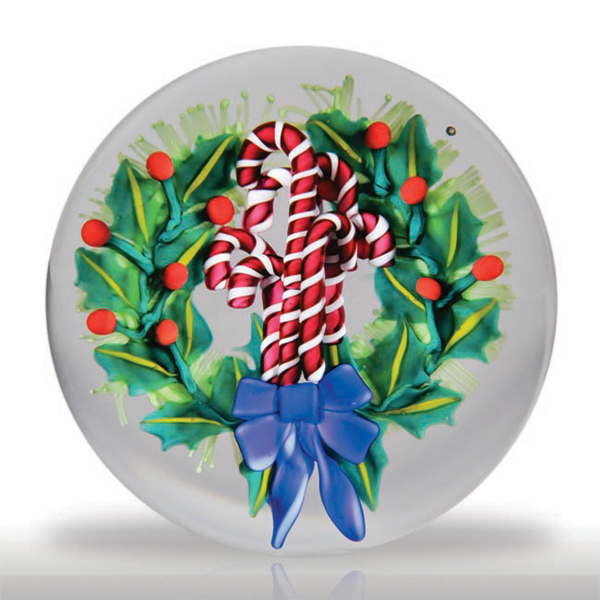 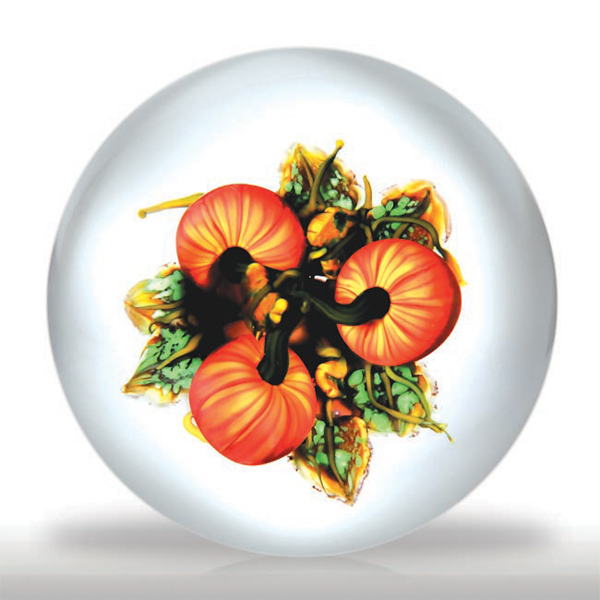 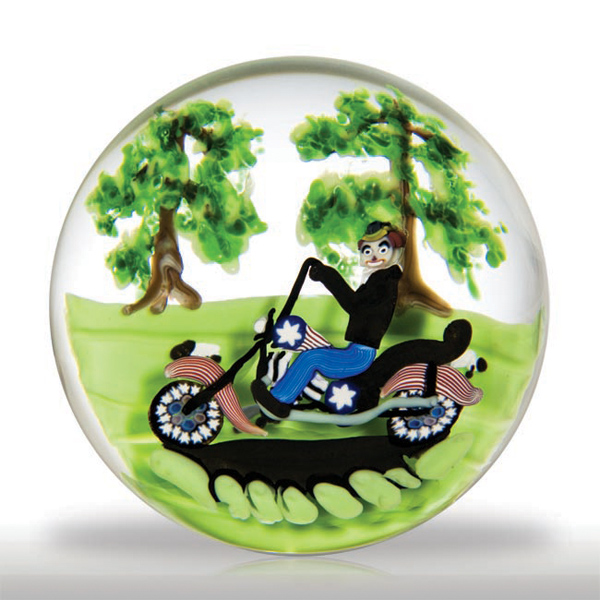 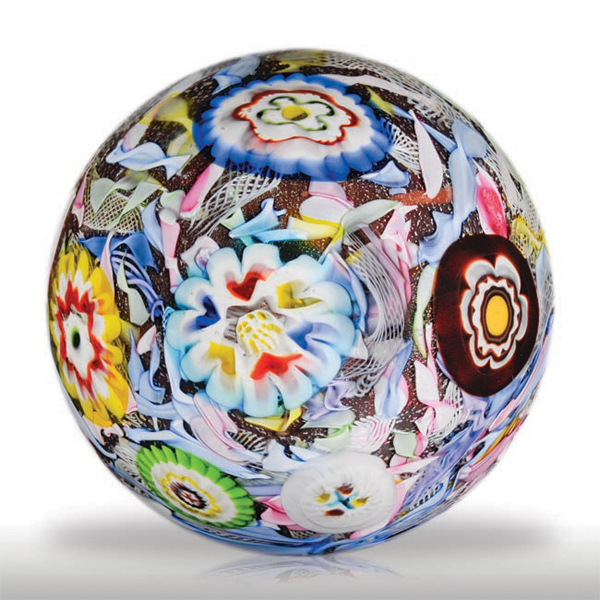 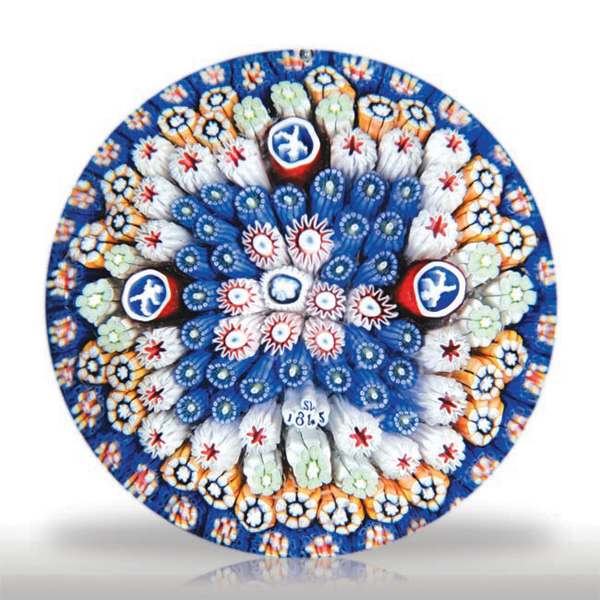 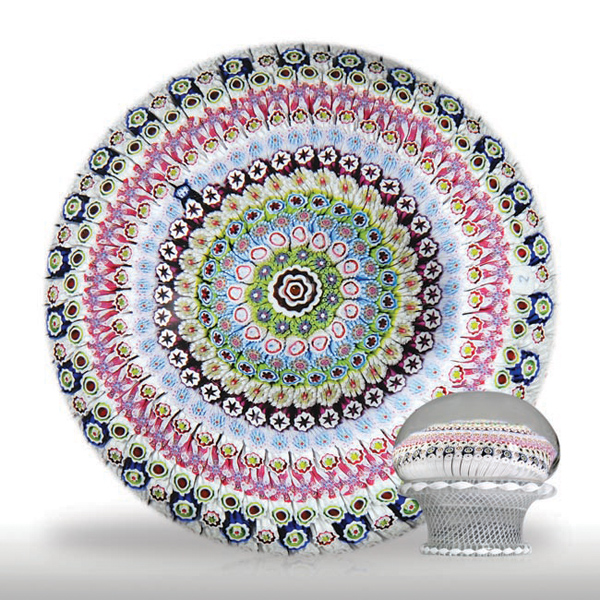